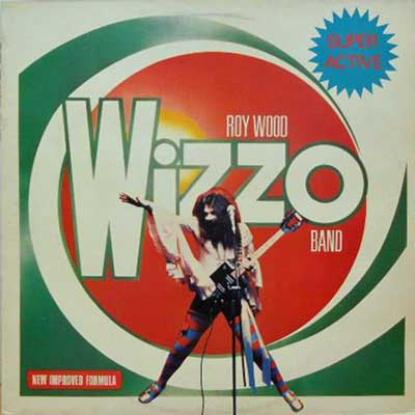 Roy Wood’s Wizzo Band was never released in this Country.  My friend Louie the Mad Vinyl Junkie, gave it to me.  He and I are fanatical admirers of Roy Wood and his old group, The Move.  This is incredibly challenging music, big band rock with horns, keyboards, gigantic drums, a million guitars, and Roy Wood.  There is every kind of music hidden in here: that huge deep metal bass sound created by The Move, those licks from classical composers, jazz interludes on the horns, and even some country swing.  These are not songs, they are compositions.

It is tempting to call Roy Wood the British Frank Zappa when talking to people who never heard of him.  They are both unrestrained unsurpassed geniuses of rock composition.  But Roy lacks Zappa’s bitterness and is, of course, never nasty.  It may be that Roy long ago achieved that teenybop appeal that Zappa deliberately ridiculed and renounced.  Roy has been to the top of the AM Top 40 commercial world.  There is a story that during the middle sixties, The Move threatened to break up if their next single did not reach number one on the charts.  Such a stunt would be inconceivable in this country.  Roy Wood seems to say “I’ll do what I want to do, I know I’m a genius.”  Zappa seems to say “Fuck you, I know I’m a genius but if you want potty music I’ll give you genius potty music.”

The vocals on this song from Wizzo – “Waitin’ At This Door” – are as complex as anything dished out by the Swingle Singers, the improvisation is hot as Maynard Fergusson, the rhythms as varied as Debussy, the musicianship equal to any on the planet.  The production is odd, very thick and cluttered, but this is all the Roy Wood Sound, almost like they’re playing at one end of a long tunnel.  He says Dig this, I dare ya.