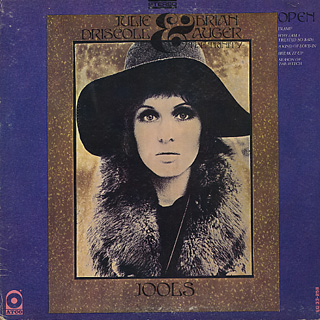 Recorded in 1968, this record would sound contemporaneous to any era, although, it would depend on the era whether you would find it in the jazz or rock bins of a record store. These incredibly tight and well structured songs feature Brian Auger on keyboards including a Hammond B, Clive Thacker on drums, Dave Ambrose on base, and an uncredited guitarist (possibly Vic Briggs or Gary Boyle). These virtuosic players improvise with such tasty sophistication, this music is truly for all times. Notably, this album was produced Giorgio Gomelsky, impresario of the Manifestival of Progressive Music (which I will tell you about some other day).

You wouldn’t know Julie Driscoll was in the band, and her image on the album jacket would seem to be just cheesecake, if all you heard was the first side of the record. But on the second side, her aculeate voice drives the music, and she and Brian find the latent jazz in “Season of the Witch” that makes this the dispositive version of this song. More recently she is known as Julie Tippets, and in addition to her work with her husband Keith Tippet (without the “s”), she has become an important outre vocalist, working with some of the greatest experimental jazz-classical creators including Robert Wyatt and Carla Bley.