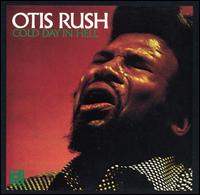 One of my A-Number One favorite blues musicians is Otis Rush and this album, Cold Day in Hell is the one that did it. My father used to tell me how Harry James could make a trumpet talk. And that’s how I feel about Otis and his guitar. He sings “You’re Breakin’ My Heart! . . . . .” . . . . . but his guitar tells you what he is saying before he sings a single syllable. Along with Frank Zappa and Albert Collins and Jeff Beck, he’s one of the few guitarists who plays with a human voice.

Thanks to The Guy in the Groove for having a wonderfully tasty selection of vinyl, including this jem, on Record Store Day 2012, no less!