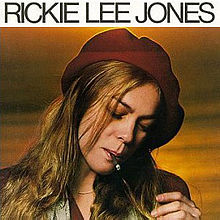 The cover of her first album is calculated to make her look tough.  Velvet hat, disheveled long blond hair, she is looking not at the camera, her eyes are hidden, looking downward or inward, smoking a brown papered cigarette.

On her debut album, the prestige of the musicians recruited to back up this neophyte is almost unbelievable.  The names I recognize: Andy Newmark drums, Randy Newman synthesizer, Tom Scott horn, Ernie Watts horn, and bunches of others just as great.  But she is in complete command.

She sings about street corners, and poolhalls, and pinball machines, and she has a song called “Easy Money” that makes you think of “Small Change.”  We thought of her as a secret cousin of Tom Waits when we first heard these grooves.  You can’t really pick up all the words because she kind of slurs and blurs them together.  But the poetry is amazing, even though sometimes you only catch it when you read the lyrics on the sleeve notes.  The sharp slap of her guitar; her voice sailing up up how many octaves.  She glides from jazz to soul and whoops from blues to folk and then she hits you with a showstopping Broadway blaster on the order of “Soliloquy” from Carousel.

She sings her flexuous melodies in raspy whispers, indolent banter, melismatic caterwauls, and melodious purity.  She peoples her songs with characters named Zero, Dutch, Bragger, Cecil, Junior Lee, Kid Sinister, Cunt-finger Louie, Bird, and, of course, Chuck E – the world in which she wanders is not safe.  Her persona is infused with midnight gigs in stinky bars and 24-hour diners and blinking neon through motel windows.

Right now I am listening to “The Last Chance Texaco.”  It is a dreamy waltz.  The scene is late night on a lonely highway, a broken down car stranded at a gas station in the middle of nowhere.  The song’s images transmute into a tale of a person too broken down, too hurt, to love.

The quiet strumming of her guitar.  The exploding crescendos that fade away.  She half speaks the song and the words seem improvised.  She slides around the beat and emits mewling whines, like the Doppler screams of cars flying by in the night.

But this one ain’t fuel-injected
Her plug’s disconnected
She gets scared and she stalls
She just needs a man, that’s all

She sounds rough and drunk and passionate and disappointed and sardonic, her gangrel tunes echoing in alleys.  Then she wails like she’s on stage at the Apollo, and her voice is so sweet and passionate and all the guile and irony melts away.