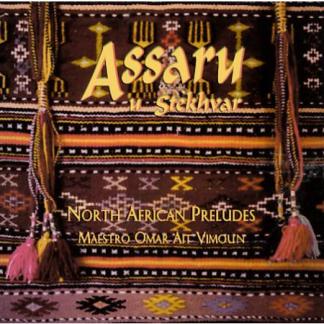 Listening to Maestro Omar Ait Vimoun.  So familiar, and yet so distant in time and place from this room in which I sit.

Omar is of the Imazighen, the indigenous people of North Africa, living today primarily in Algeria and Morocco, but also other North African nations including Mauritania and Tunisia.  They were the Berbers of Ancient Rome, and were among the aggregate of peoples we now call Moors who conquered Spain.  Through the centuries they were entwined with Arab culture and Islamic beliefs.  The influence on Western European culture of the Berbers, from scientific and mathematical discoveries, to the origination of musical instruments and artistic forms, cannot be underestimated.

Omar describes the songs on this record as stekhvar.  They are preludes to traditional suite-like compositions called nuba.  A nuba can last for up to seven hours and I wonder if they are musical arrangements of epic poems – a Berber Gilgamesh or Iliad or Lusiads.  The poems Omar sings are by great Algerian poets including verse called “Ghrib” (“The Dollar”) by Cherif Kazem:

How come we need tons of you?  We seek and follow you.  Blame not the restless, they never gambled and they never won.

He sings his own words as well, including a tender elegiac “Ode to Mother”:

My destiny had to intermingle with yours, my mother, my parent.  With hardships and burdens you raised me.  From you I wish forgiveness.

The word assaru, from the title of this album, refers to a woman’s knotted belt.  Knotted chords from the most ancient times were used to count and keep records and jog memories.  Here the assaru is the collection or anthology of preludes performed by Omar.  But I wonder if, in the Berber culture, it was the women who, with these knotted belts, were the counters of value, the keepers of memory, and the guardians of history.