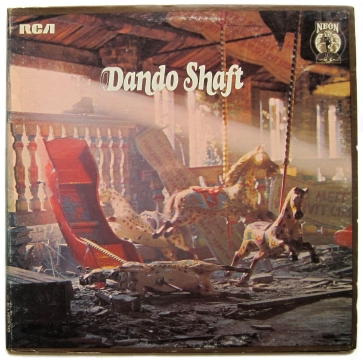 Dando Shaft came out with three albums in the early 1970s.  How this song prances:  “Kalyope Driver.”  They pronounce it “KÁL-ēē-ōp.”

The original calliopes produced music by forcing steam through banks of whistles.  They were played by a keyboard or by mechanical means, after the workings of a player piano.  Carried on wagons drawn by teams of horses, driven by a teamster, they were a standard feature of circus parades and, because they were extremely loud, would alert people from miles around that the circus was in town.  The shining calliope pipes were arranged in rows from tallest to shortest and the wagons were gaudily painted.

In this song, the Kalyope Driver is much more than a teamster.  He is a mystical or godlike pied piper who calls all humanity to a better world.  As I hear the words:

This song is in the aeolian mode, and the minor harmonies mingle hope and foreboding.  At the heart of the aesthetic ideology of Dando Shaft is a renunciation of electricity.  As far as I know, they never used electric instruments.  The guitars, the drums, the fiddle, and even the bass are all unamplified, except by studio or stage microphones.  The music is structured with layers of texture.  Overlaying the ornate tabla beats, the patterns plucked on the mandolin are counterpoised against the picking on the guitar, creating complex polyrhythms.