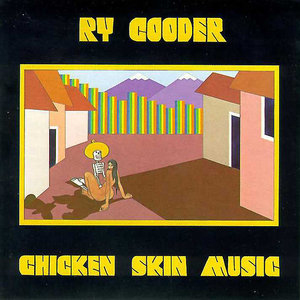 One of my all time number one favorite recording artists. What perfection. These old sounds, corny words, rootsy beats, wistful harmonies, simple chord changes, blues and folk and funk and rock and jazz and Latin and African and the Whole Wide World, all that popular culture and he makes such delight out of it all. He is a musician’s musician. And he revives that funny out of tune tuning of Joseph Spence, and he uses those Cajun and Hawaiian and Mariachi sounds so rarely encountered in the rock world.

Listen to this version of Jim Reeves’ “He’ll Have to Go.” Elvis Presley recorded a cover of this tune, and they say it was the last song he ever recorded. Here Ry is playing with his usual crowd of unbelievable musicians including Jim This-Guy’s-Played-Drums-On-Every-Record-Ever-Made Keltner and the great Tex-Mex accordion player Flaco Jimenez in loose dialogue with Pat Rizzo on sax. Ry Cooder’s music is about the joy of music. He puts happiness out there. He just does.

When I was at WZIR, I interviewed him. He was humorless and arrogant. I guess he thought he was talking to a meat headed rock jock. I said, You use that weird out of tune tuning and he started in the schpiel about Joseph Spence this guitarist from the Bahamas and I said Yeah I know I play him all the time on my show – but he didn’t hear me. He was totally patronizing. Then I said, Bop Till You Drop, what a great album! He said, I despise that album. I hate every note on it.