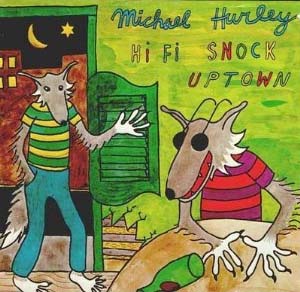 Well he does sing.  Like it’s amazing singing.  Even using a falsetto.  But there is something about his singing that is more like talking.   And then there are these people and animals, and animals that represent people, he sings about.  And then the stuff that is so ordinary that it’s hard to understand why it’s worth singing about at all, like taking a wiz, and finishing a beer, and picking out bones from a fish.

I’ve heard he really lives like a hobo, traveling to gigs in a clunky jalopy, sleeping in his car or on couches and wherever.  You can hear Leadbelly, Hank Williams, Fats Domino, Son House, Lightnin’ Hopkins, and maybe even Joseph Spence, and who knows what bunch-of-others sending their inspiration into his sound.  For a time he played and wrote songs with Peter Stampfel and Steve Weber, the core members of the crowd of loonies known as the Holy Modal Rounders (which you must not forget is a spawn of the empire crushing Fuggs phenomenon).

And don’t forget his cartoons.  As inscrutable and captivating and perhaps weirder than those of R. Crumb and Bill Griffith and even Art Spiegelman.  How do those wolves walk and live in a human world and why are they the only ones playing music, and why do wolves seem to be the only objects of desire for those zaftig human women prancing naked in the street?

And then these crazy things that happen in his songs, involving werewolves and ghosts, not to mention his celebration of robbing banks and cutting off his lover’s ear.  And what the hell is a protein monster?

It may be enough to say he is one of the greatest folk stylists ever in the history of the United States of America.  He is that, but he communicates about a social niche or way of life or state of mind that few, if any, would ever otherwise experience.  He is In The Life, he is an outsider.  The star of this album is named Hi Fi Snock but we know it is really Michael Hurley, even if we don’t know why.

And then there is just the loneliness, the blues, the strife, the missing you, the longing for peace:

How could anyone sound at once so drunk and sad and funny and profound?